By S G - October 28, 2011
I had reported a potential flaw in the Android system that could be used to perform DOS (Denial-of-Service) on an Android Phone. The issue was caused by a poor programming assumption which could have been avoided with a good programming 101 course.
I had developed a tool called c-ray to help me with quick and dirty pentest and analysis of android applications and system. I stumbled on the issue while playing around with android core system and c-ray application.
The issue was caused by an input validation error caused by assumption of the developer. An intent to "android.accounts.GrantCredentialsPermission" class of android core system results in system crash and reboot of the system. Further analysis and reasons below.

For the normal user - Steps to reproduce the problem: 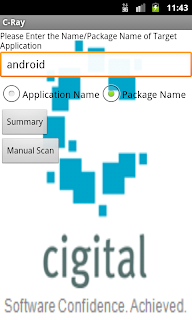 Manual Scan feature lists all activities, services and receivers associated with an application - in this case the android core system.
Click the "android.accounts.GrantCredentialsPermission" from the manual scan list and continue with default action. 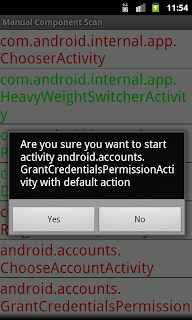 CLick "Yes". The system will freeze for a moment and then reboot with your usual boot screen image/logo.

A malicious app can incorporate this vulnerability along with an SMSReceiver and BootReceiver Broadcast receivers to trigger a system reboot and force the system to keep rebooting. I was able to write a POC app which starts the reboot cycle upon receipt of an sms and force the system to reboot continuously, every time it comes back up.
The time duration between reboots is quite small (depending on device used) and does not allow the user to uninstall the application from settings. On a production device with stock/non-rooted build the only way to stop the reboot process would ideally be restoring the device to factory settings and wiping data partition.
Potential Fix:
Change GrantCredentialsPermissionActivity implementation to check whether extras retrieved from the intent is NULL or not:
Android androidsecurity denial of service dos iPhone Security Mobile Security mobilesecurity

Popular posts from this blog

By S G - September 22, 2011
I recently noticed that iOS MDM servers have the ability to connect to phones and initiate checkins even when a device is connected to WiFi. Packet analysis showed absolutely no communication between Apple PUSH service or MDM servers with the phone. On the contrary, the transaction was always magically initiated by the iOS device. How could this happen? As we know, iOS devices have 2 NIC's - one for WiFi and the other for 3G communication. On further analysis, I was able to observe that even though the device switched over to the WiFi network, the 3G network interface of the device was still active in the background and maintained a persisten connection to apple PUSH servers at port 5223 . Hence, whenever Apple or MDM servers wanted to send a PUSH notification, the notification was sent over 3G and in response the device responds back over WiFi. A simple netstat on the device reveals the following: netstat -a tcp4 0 0 10.XXX.XXX.XXX.4XXXX nk11p01st-courie.5223 ESTABLISHED Th
Read more

By S G - November 13, 2011
Now that iOS 5 has released and Apple CLAIMS to have fixed the issue, I believe its time for a full disclosure... What Users/Enterprises MUST know: I had reported a security vulnerability with iOS 4 implementation to Apple in OCT 2011. This vulnerability allows an attacker with physical possession of an iOS device or an attacker with the ability to remotely jailbreak a device to retrieve the victims EXCHANGE/Account (email or exchange account) credentials (username + password) in clear text. Hence, if an iOS 4 device is lost/unwillingly jailbroken, immediate steps MUST be taken to ensure that the users credentials are RESET or account locked. Remote administration options like Remote Wipe/Lock/Locate are not effective as an attacker can easily bypass or block remote administration options. This issue has been partially addressed and fixed by Apple in iOS 5. New changes in iOS 5 ensures that the credentials on an iOS device remain secure if a device is lost/stolen. However, the ri
Read more

Why does my Android App READ SMS?

By Sarath Geethakumar - August 30, 2011
I have been wanting to write a blog on this topic for quite a while and finally here I'm. With the rampant adoption and popularity of Android phones, Android apps and android market place are gaining wide spread popularity. I have noticed that most of the apps that we see/use now ask for seemingly harmless permissions like "READ PHONE STATE", "READ_SMS" etc. This post highlights the dangers and security flaws associated with "READ_SMS" permission on Android devices.
Read more